Blink twice if you typically sleep less than seven hours each night.

Go ahead. I'm not watching, or judging. But if you're part of the one-third of U.S. adults who get less than the recommended amount of sleep each night — please, blink twice.

I, too, am part of what Eleanor Morgan, chief experience officer at Casper — the ecommerce company known for its sleep products, including its famed memory foam mattress — calls the most “under-slept” developed nation (the U.S.) in the world.

This national epidemic of “short sleep duration” — the Center for Disease Control's (CDC) term for habitually getting less than seven hours of sleep each night — well, it's resulted in what Morgan has observed as “a lack of joy and happiness related to sleep.”

A2. CDC data show that nearly 40% of health diagnosing and treating practitioners report a short #sleep duration of less than 7 hours on average https://t.co/hNXXDAezWn #ATSchat #MakeTime2Sleep

The CDC calls it “frequent mental distress” — one of the many side effects of regularly getting an insufficient amount of sleep.

But it turns out that Casper — the company that admittedly started out as one that aimed to sell mattresses to millennials — wants to cure this epidemic. To democratize sleep. To make it okay — as it is in countries like Spain, Morgan uses as an example — to take a nap during the day.

How Casper convinced legions of millennials to love something as pedestrian as a mattress company: https://t.co/YJPn6lXCGA

Its answer to the nationwide sleep shortage is The Dreamery: a brick-and-mortar nap boutique, of sorts, located in New York's SoHo neighborhood.

I decided to give it a try.

I was able to tour The Dreamery this week as part of Code Commerce — a conference that centers around ecommerce and retail — where I had a quick look at Casper's nap shop, and learned more about its mission and operations.

At The Dreamery, a 45-minute nap costs $25. It includes the option of changing into appropriately-themed navy blue pajamas with astrological patterns, grooming products to help your skin recover while you sleep, and access to the location's lounge, where visitors can enjoy a range of snacks, beverages, and 30 minutes of free WiFi. 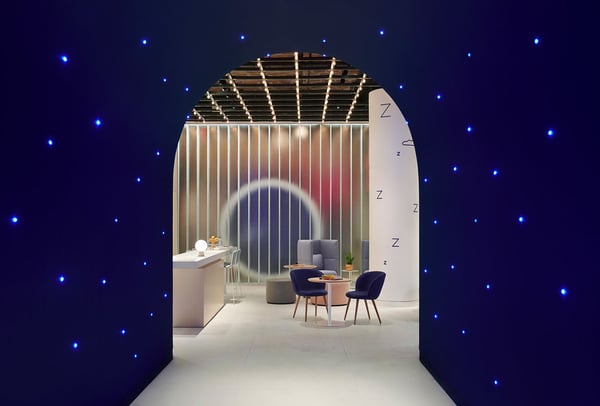 Your initial reaction might be, “There are people who pay for naps?” Don't worry — you're not alone, and I had a similar impression at first. Was $25 an inflated price tag for less than an hour of snoozing? Or was it a bargain?

To find out, I decided to go back to The Dreamery the next day and fully immerse myself in the nap boutique experience.

That particular day, quieting my mind for even 45 minutes in an environment built specifically for sleep seemed hopeless. Just before arriving, I had gulped down a large coffee. I was dealing with a bit of a crisis. And I didn't have a ton of time to spare — after my $25 nap, I had meetings to get to.

But as I reentered the electric-star-studded entrance — late for my snooze appointment, of course — and received a calm, reassuring “It's okay!” from the front desk attendant, my perspective began to slightly shift. “At least it's pretty in here,” I thought. 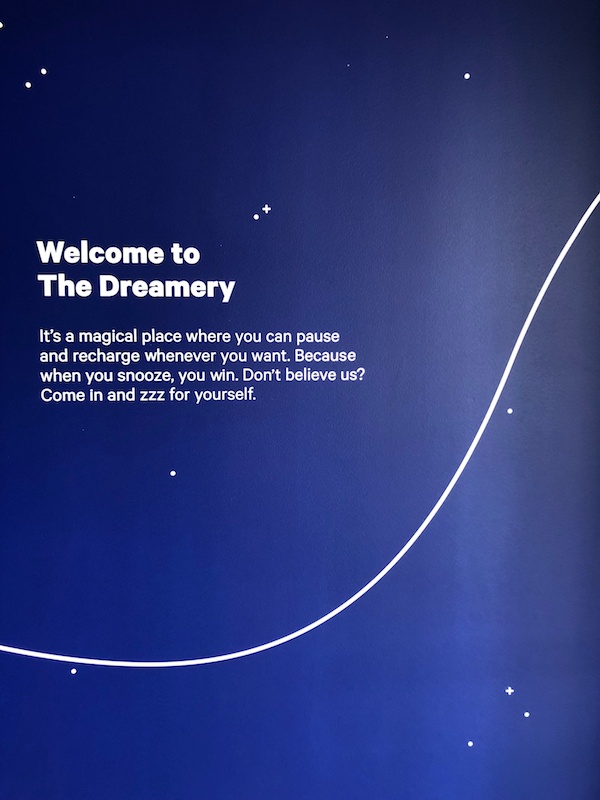 I opted for the pajamas — after all, I wanted the full experience — and after changing into them in one of The Dreamery's “refresh rooms,” I was guided into the quiet area: a cool, dark room studded with more electronic stars and tent-like sleep pods sitting among ambient, chillout music. 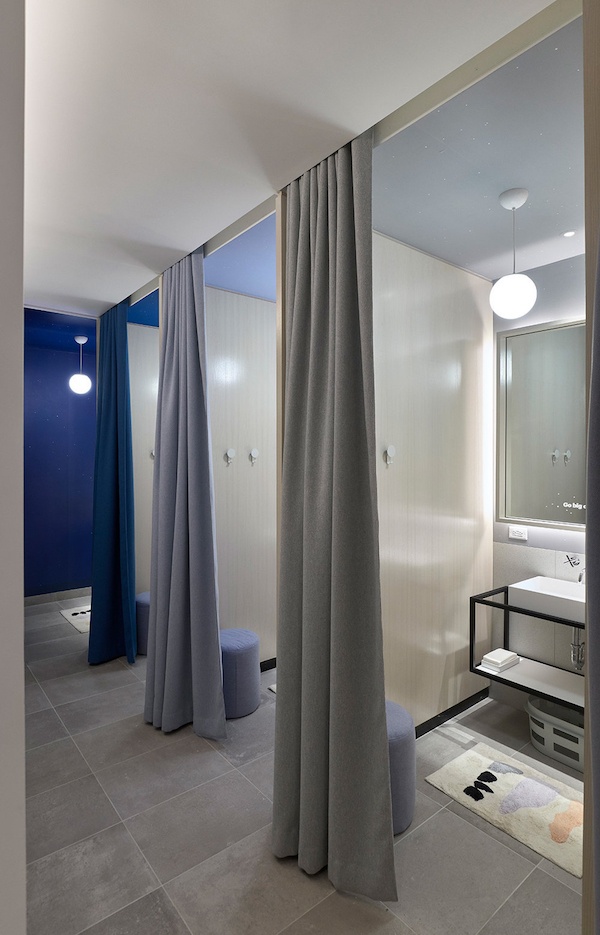 Each nap pod is equipped with a Twin-XL-sized Casper mattress, with fresh sheets that are changed before every nap (part of what makes the experience “indulgent,” Morgan says).

There's a light switch that nappers can use to darken the room before dozing off, and an outlet that can be used to charge their phones — of particular use if tuning in to one of the guided “sleepcasts” that Casper, in partnership with meditation app Headspace, developed specifically for naps. 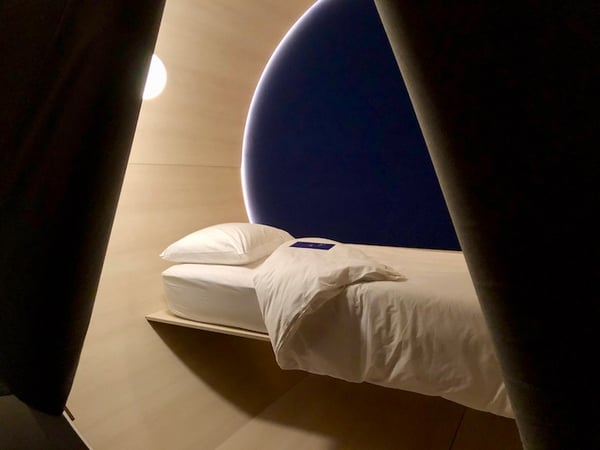 A nap pod at The Dreamery

Upon crawling into my pod, my decision to leave my phone in the locker provided became salient. I had forgotten that there was an outlet available, and being that my phone is routinely the last thing I look at before bed (a bad habit that I know better than to engage in), being without it felt a bit unnatural.

I shut off the light and began stifling uncontrollable giggles. “This is so weird,” I thought. “What am I doing? Why am I in a pod, in a room with a handful of strangers, also napping in pods?”

I closed my eyes. If all else fails, I figured, I can use the time to brainstorm a work project without the distraction of phone notifications.

It was a nice thought, in theory.

Before I knew it, I was napping hard — woken up only once by the subway passing beneath the street where The Dreamery is located — and even recall having two dreams. (The name, it turns out, isn't just for kicks.)

When the 45-minute allotted nap ends, visitors are gently awoken by a soft light inside of the pod that gradually brightens. “I don't want to get up,” I whined to myself, feeling bad about how skeptical I had been of this place.

What Marketers Can Take Away From Casper's Mission

I was sold. Would I pay $25 for another midday, work week nap? Absolutely — and I would recommend that others do, too.

It's hard to take a break during the day — important and productive, but difficult to actually execute, given the human propensity to feel bad about stepping away from our responsibilities, even for a short period.

And as it turns out, that's Casper's end game — to curb that propensity to feel bad about taking breaks, especially when it manifests through a de-prioritization of sleep.

So if there's any marketing lesson to be gleaned from The Dreamery experience — it's to lean into the taboo. In the U.S., that's one word to describe the idea of taking a nap in the middle of the work day. Sure, HubSpot has a nap room, but I would venture to say that it's among a limited number of employers to provide such a benefit.

Casper is working to make that phenomenon — the North American siesta — less unthinkable, and more “aspirational,” as Morgan puts it. That's why the company is looking to partner with a number of brick-and-mortar location categories, like workplaces and airports, to vertically integrate nap pods as on-site experiences.

I've always wondered why that's not a “thing”: nap pods in airports, for example, especially after experiencing more flight delays than one person should.

The possibilities don't end there, either. While stuck in traffic on my way to the airport this morning, for instance, I began to wonder if Casper might partner with Uber or Lyft to create an in-ride nap experience. 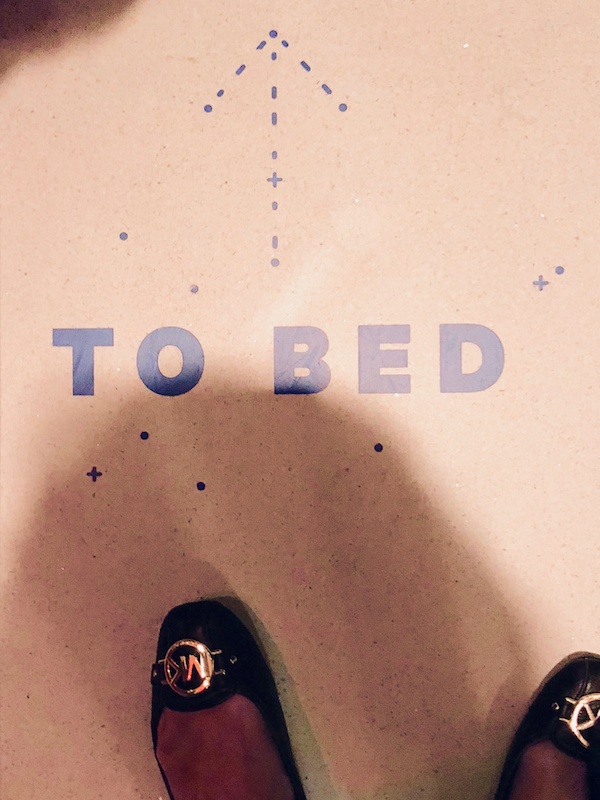 Experiential marketing can be an extremely valuable device — especially when it's mission-focused. It invites an audience to interact with a business, in an in-real-life setting.

By using participatory, hands-on, and tangible (but branded) experiences, businesses can show audiences not just what the company offers, but what it stands for.

Which is another lesson to marketers: In the process of figuring out what makes your business, brand, or product unique — and perhaps even taboo — lean into it, and create a remarkable experience around it.

What's the meaningful movement that aligns with your product or service — one that people can and want to rally behind? Once that question is answered, figure out who it makes sense to partner with to develop and promote it.

“How do we shift that mindset around sleep and create a cultural movement?” asks Morgan. “Making that experience as delightful as possible is a priority.”